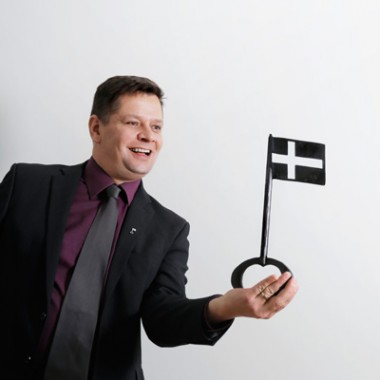 We celebrated the 50th anniversary of Key Flag Symbol in 2015 with the Nostetaan Suomi plussalle! campaign together with the Key Flag businesses.

The campaign reminded consumers of the importance of Finnish work and the wide spectrum of the Key Flag Symbol companies.

Over the summer, the jubilee tour visited Oulu, Seinäjoki, Vaasa, Jyväskylä, Kuopio and SuomiAreena in Pori. 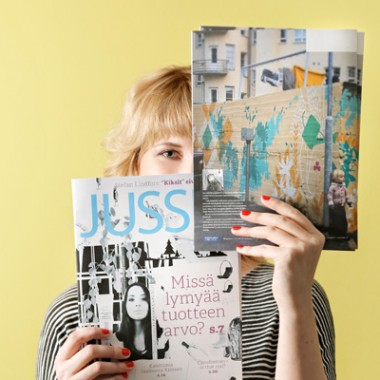 The Association initiated a research project exploring High Value Work together with The Futures Company, an international research organisation.

With the research project, the Association wishes to contribute to the debate on how work is changing and to draw attention to what High Value Work means and how it can generate new opportunities and value for employers, workers and society.

First published in 2011, the Association’s member and stakeholder magazine Avainlippu was transformed and its name changed to Jussi. 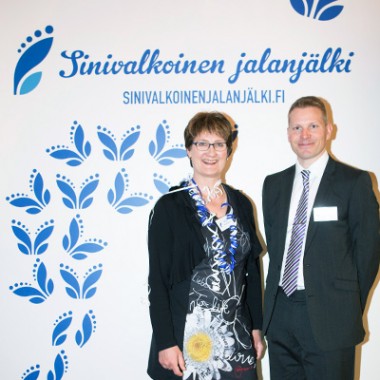 At the end of 2013, the Association launched the Sinivalkoinen jalanjälki campaign with the K-Group stores and some 50 Finnish food industry and consumer goods companies.

The main objectives of the campaign were to increase sales of Finnish products, talk about Finnish design and the work that goes on behind the scenes and bring about better opportunities for consumers to choose products that contribute to Finnish work.

The campaign introduced a calculation based on Osmo Forssell’s input-output analyses: if everybody in Finland would use 10 euros per month to buy more Finnish products and services, that would create 10,000 jobs at an annual level. The campaign ran throughout 2014 and continued to 2015 and 2016. 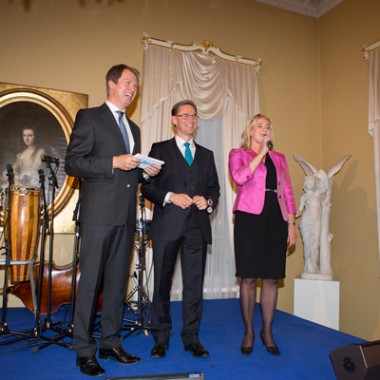 The jubilee culminated in the 100th anniversary celebration, held on 24 September 2012 in the Government Banquet Hall in Smolna House. The party was also a networking event where businesses, orgnisations and individuals across the economics spheres received Good Work awards. The prizes were unique works of art by young Finnish designers. The celebration was televised and broadcasted on MTV3 on 13 October 2012.

The mark can be awarded to companies which dedicate most of their profits to advancing the social objectives of the company.

The mark was proposed by the Ministry of Employment and the Economy which considered the Association to be the appropriate organisation to implement the project. The design competition was won by the proposal by Elina Järvinen ja Harri Hom. 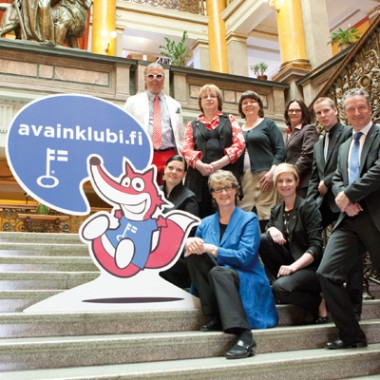 The Association transformed its online service provision and built up its social media presence.

The Association launched Sinivalkoinenvalinta.fi, a one-stop marketing platform for its member companies, which brings together all products and services holding the Key Flag Symbol, Design from Finland or Finnish Social Enterprice marks.

A social networking service Avainklubi.fi was set up to facilitate product development in member companies.

2011 Design from Finland is born

The Design from Finland mark was developed alongside Key Flag Symbol in recognition of Finnish design.

The Design from Finland mark may be awarded to any product or service designed in Finland, provided that the company has demonstrably invested in Finnish design.

The apperance of the mark was updated in 2013. The new dark blue round mark was designed by Werklig, a brand design agency. 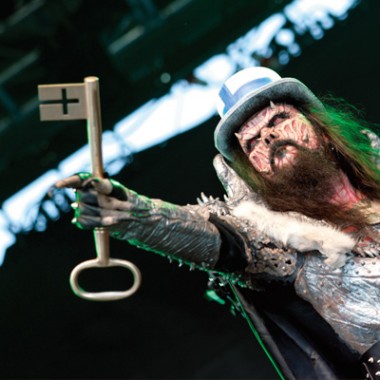 In May 1995, Finland’s national ice hockey team, the World Championship gold medal winners, received the Avainteko certificate of honour on the Market Square in Helsinki. The event was witnessed by 2.3 million television viewers. 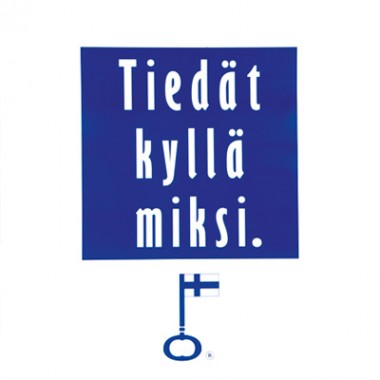 The name change signalled a new approach and a new look. The Association’s magazine was named Hyvä Suomi!

The significance of Key Flag increased when the country of origin labelling was no longer mandatory.

The Association’s campaigns, planned by Hasan & Partners, a leading advertising agency in the 1990s, became industry trendsetters in Finland. 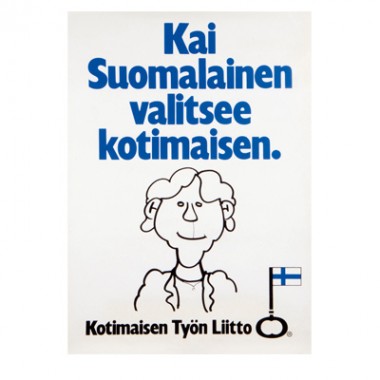 As a result of the merger, campaigns promoting Finnish origin, previously funded by the state and the private sector through various organisations, and the mark of origin activities were brought together.

The previous marks were abandoned but the popular Key Flag Symbol mark was saved as the Association’s mark of orgin. 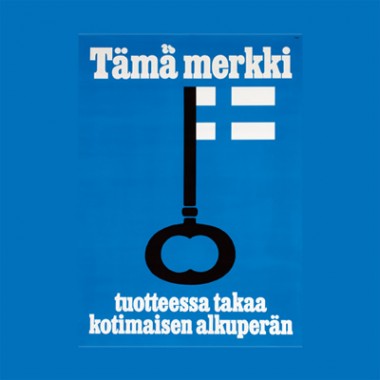 A mark of origin was first proposed in May 1973 by Annikki Jäntti, Executive Director of the Martha Organisation, at a meeting of the Delegation for Domestic Production.

In 1975, having served as a campaign logo for a decade, Key Flag Symbol became the mark of origin awarded to proven domestic products by the Delegation for Domestic Production working under the Ministry of Trade and Industry.

Among the first products to be awarded the mark were Norlyn tights, Finnmatch matches and Nokia toilet paper. 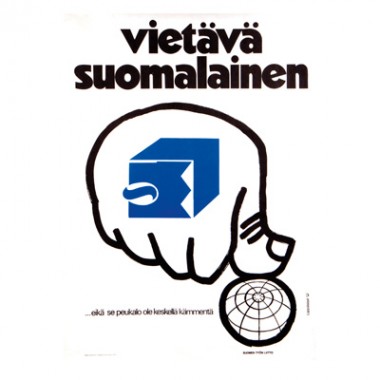 Graphic designer Kaj Kajander designed the lion’s head attached to the side of a box to be used in Finland’s export products.

The export mark was the third label, following the mark of origin (lion’s head) and the guarantee mark (lion’s head in an octagon).

The idea and vision behind this was to create a hierarchy of marks, with only internationally successful, outstanding products having the right to hold the export mark. 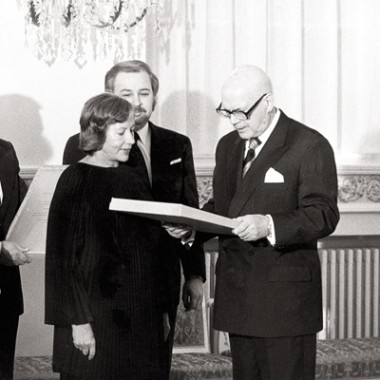 The Export Award was founded on the Association’s initiative. The award ceremony at the Presidential Palace was a grand event.

In 2000, the award was renamed the Internationalization Award of the President of the Republic. 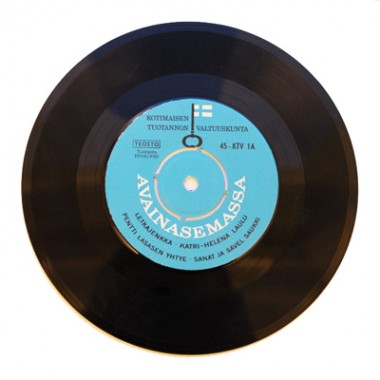 1965 Delegation for Domestic Production set up, the Key Flag Symbol is created

During Prime Minister Johannes Virolainen’s term of office, the Government set up a Delegation for Domestic Production with representatives from the Association.

The Key Flag Symbol was designed as the logo for the decade-long Osta kotimaista campaign, persuading consumers to buy Finnish products. The campaign was commissioned by the Government, and its theme tune “Avainasemassa” was sung by popular entertainer Katri Helena. 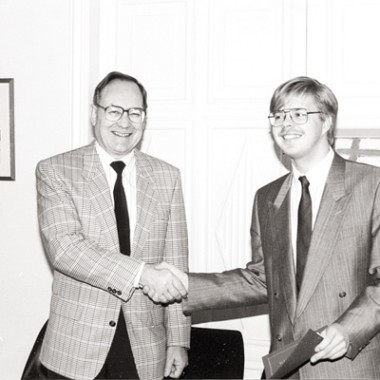 Osmo Forssell’s findings proved that public contracts that favoured Finnish production really were profitable. Forssell’s study was the first of its kind in Finland.

Input-output studies remained as the foundation of the Association’s research and communication efforts from the 1960s to the 2000s. 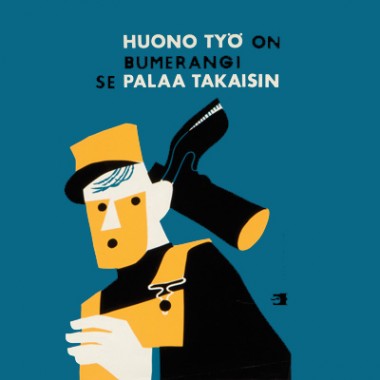 All through the 1950s, the Association organised campaigns promoting improvements in quality, inspired by the cheerful and snappy messages broadcast in the United States at the time. Quality control in factories was largely introduced on the Assocaition’s initiative.

In 1957, the guarantee mark depicting a lion’s head in an octagon was introduced.

The mark of origin was a lion’s head without the octagon frame. 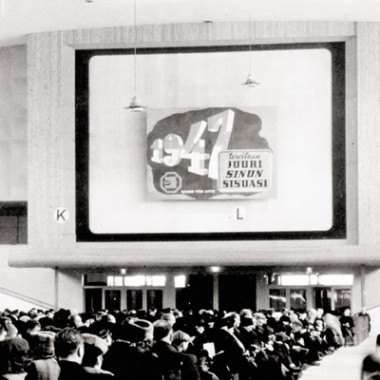 In the summer after the Winter War, Kotimainen Työ ry. (National Work Association) changed its name to Suomen Työn Liitto (the Finnish Assocation for Work). The new name was considered to better reflect the nature and objectives of the Association.

A decade of campaigning began, focusing on the perseverance of Finns. The Sisu campaign enjoyed spontaneous support from the citizens and grew to an enormous scale. These were dangerous years in the shadow of the Soviet Union. 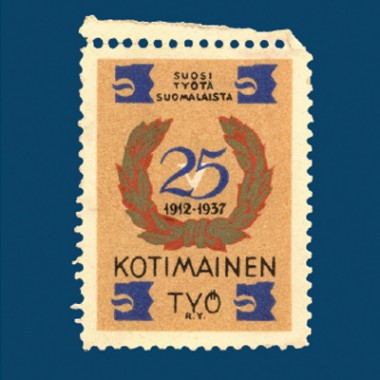 The Association’s office recruited keynote speakers and posted celebration poems and presentations to local committees from Hanko to Petsamo, the press went wild, and parties were held across the country featuring films, theatre and fashion shows. 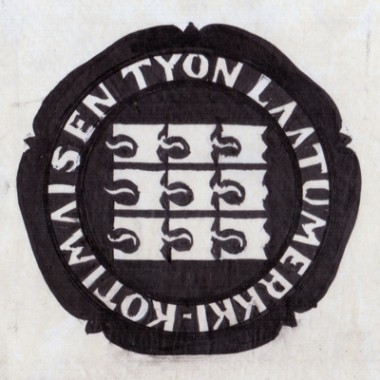 The quality mark only awarded to outstanding Finnish products was a variation of the lion mark with nine lion’s heads in a rosette.

The quality mark was awarded to “outstanding Finnish products the manufacture of which is to be regarded as a victory for our industry and an achievement of our national economy”. 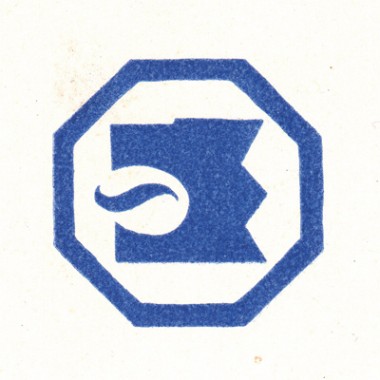 The stylised lion’s head in an octagon became the mark of Finnish origin and the mark of the membership of the Kotimainen Työ ry. association.

The lion’s head mark was the guarantee of quality in the 1930’s and was also widely plagiarised abroad.

The lion’s head mark was designed by architect Matti Björklund, who also illustrated the Finnish Kalevala in the 1930s. 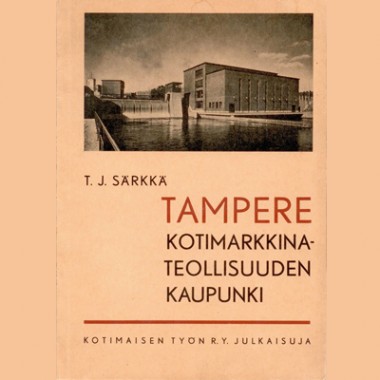 After a break of more than a year, the Association launched its own magazine, Suomen Työ. 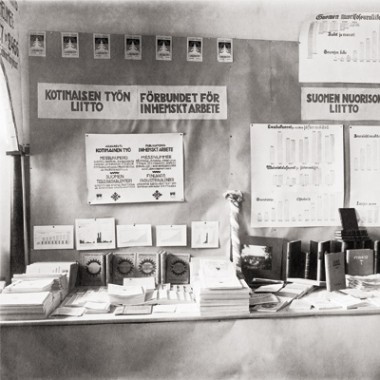 The first national fair organised by the Finnish Fair Corporation, Suomen Messut, took place in Helsinki. It turned out an enormous public celebration and a showcase of talent.

At the Kotimaisen Työn Liitto stand, visitors could view Finland’s balance of trade and purchase a trade calendar.

Kotimaisen Työn Liitto was involved in the organisation and regularly exhibited at the fair.

In 1921, when the Finnish Fair Corporation became a limited company, the first two shares were subscribed by Kotimaisen Työn Liitto. 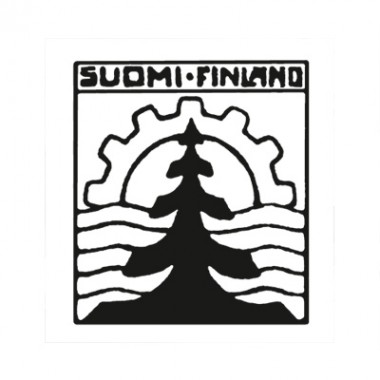 1917 The first mark of origin created

In August 1915, Kotimaisen Työn Liitto announced a competition to create a sign of origin suitable for Finnish products.

The competition winner was Arne W. Rancken, whose mark of origin showed a spruce tree growing by a body of water against the backdrop of a cogwheel. 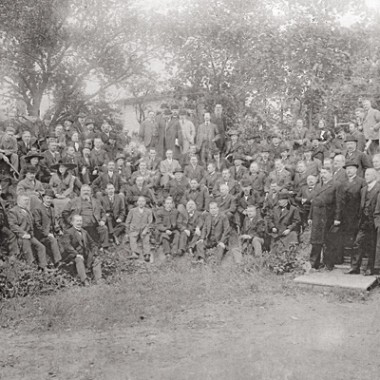 In 1912, Finland was a Grand Duchy in the multinational Russian empire. Kotimaisen Työn Liitto (the Assocation of National Work) played a part in Finland’s strive for independence.

The Association was originally founded for the organisation of the Finnish Week, a domestic industry promotion event. The Finnish Week was held several times between 1913 and 1975. It was a major national festival with lectures, concerts, outdoor events, advertising parades, window display competitions and industrial exhibitions.

In order to support the Finnish Week, the Association launched the monthly magazines Kotimainen Työ in Finnish and Inhemsks Arbete in Swedish.